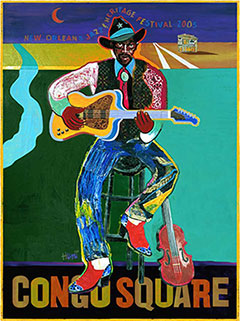 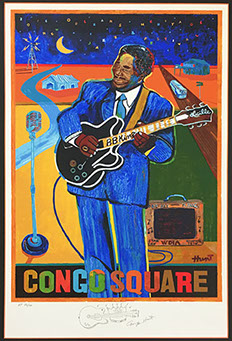 Artist George Hunt was selected to paint the image for the 2005 New Orleans Jazz & Heritage Festival's Congo Square poster.  The Festival wanted to create a tribute to Clarence Gatemouth Brown, the iconic country blues entertainer who spent a lot of time in and around New Orleans.  George Hunt studied dozens and dozens of photographs of Gatemouth taken over the years and used bits and pieces for inspiration as he painted a relaxed Gatemouth sitting on a stool in a stark landscape that includes several icons from the entertainer's life.

The painting, with collage, is a bold in-your-face representation of Gatemouth playing an old Fender Jazzmaster guitar, fiddle leaning against the stool.

George Hunt and Gatemouth together unveiled the original painting at a reception in the prestigeous Ogden Museum in New Orleans.

George Hunt's palette echoes the colors King coaxed from his beloved guitar, Lucille, King’s constant companion in creating his brand of blues. King’s road passes Club Ebony, a vital “chitlin circuit” nightclub and another constant in his life. Opened in 1948 in Indianola, Mississippi, the club showcased every legendary black act of the era, including B.B. His 1957 Flexible Starliner Tour Bus dashing towards us represents his peripatetic life. The road sign points to Jazz Fest—where he filled the pictured Blues Tent in the crescent of the Mississippi River and other Festival venues a dazzling 34 times from 1972 to 2013—and to Beale Street, where he opened the original B.B. King's Blues Club in 1991.

George Hunt traveled a road parallel to King's, emerging as a different type of Memphis bluesman. While B.B. moved to Memphis for radio, Louisiana-born Hunt went searching for subjects to paint, with equivalent success. Hunt proves that the soul of blues can enchant the eye as much as the ear. B.B.’s intensely soulful musicality is tangible in the expression Hunt captures on King’s face. B.B.’s depicted body language summons the deep yet seemingly effortless immersion that suffuses King’s work. With deceptively simple gestures paralleling King’s own, Hunt clarifies the soaring emotional connection King’s music still makes with each of us.

MAY TAKE UP TO 4-weeks

Official website for George Hunt Art.  Images © 2000-2017 George Hunt.  Website and text © George Hunt/LongRiver Entertainment Group LLC.  All rights reserved.  No image or text may be used without prior written consent.  Requests for use should be submitted to david@georgehuntart.com.