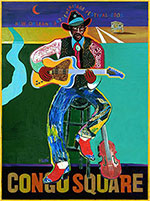 Email for permission to use material.

In 1996 George Hunt was commissioned to paint 24 portraits for Blues & Legends Hall of Fame Museum in Robinsonville, Mississippi. He also created the original painting for the large mural on the exterior wall. Hunt was selected because his deeply rooted history in blues combined with his bold, dramatic, artistic style to produce images that capture both the uniqueness of the individual and the essence of this colorful music. It was both an honor and a dream come true for George when he the completed the museum’s paintings in 1998.

Hunt was selected as the featured artist for the Rock & Roll Hall of Fame Museum’s American Music Master’s annual conference in 1998. The conference, Hellhound on My Trail: Robert Johnson and the Blues, utilized a George Hunt painting for the poster; and included a one-man show at the 9th Street Gallery in Cleveland. A year later he was selected again to create a painting of Muddy Waters for the Museum.

George Hunt’s name and images have become synonymous with The Memphis In May Beale Street Music Festival. For 24 years, he has been selected to paint an original blues image for the festival posters, which have become valuable collectors items.

In 2005, Hunt was honored by being selected as the artist for the New Orleans Jazz and Heritage Festival Congo Square poster. He was given a special exhibit during the festival at Stella Jones Gallery and was honored with an exhibit at the Ogden Museum.

His work has become definitive images for posters and promotion of many other blues festivals around the country including Chicago Blues Festival, Telluride Blues Festival, the Ultimate Rhythm & Blues Cruise, and the Arkansas Blues Festival. Hunt was selected to create a painting for the 25th Anniversary of the Blues Foundation’s prestigious Handy Awards.

George Hunt's painting, “America Cares/Little Rock Nine” was selected to be on a U.S. Postage Stamp in 2005.  He was honored at ceremonies in Little Rock and Memphis. The painting was originally commissioned for the Central High School Museum, but first spent five years hanging in the White House in Washington, D.C. First Lady, Hillary Clinton, in a personal note to Mr. Hunt, wrote, “we are grateful that our visitors and staff have such a powerful image of hope and freedom to greet, inspire and inform them.”

The Memphis Chapter of The Garden Club of America selected George Hunt in 2004 as the featured artist for its highly competitive and prestigious national floral arranging competition held at Dixon Museum Gallery and Gardens in Memphis. Teams from around the country studied Hunt’s work for over a year, then imported both familiar and exotic flower from the western hemisphere and around the globe in an attempt to match the vibrant colors and unique forms in his paintings.

Mr. Hunt’s work has been exhibited in both individual and group shows nationally, and it is part of the permanent collections of museums as well private collectors such as Steve Wynn, Anthony Quinn, Eddie Murphy, Steven Seagal, Justin Timberlake and David Simmons. He has been featured and written about in many publications including an Ebony Magazine feature in 2005. Hunt is represented by LongRiver Entertainment Group, Memphis, Tennessee.