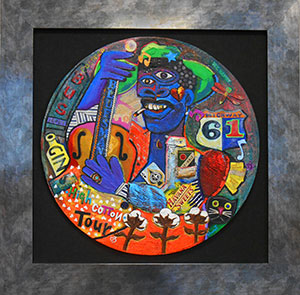 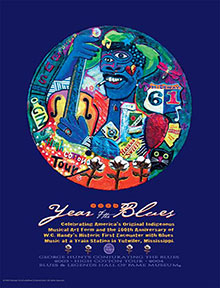 39" round  acrylic & collage on board

Inquire for more details and a larger image.

Year of the Blues

Acknowledging that Blues Music is America's original musical art form, the U.S. Congress declared 2003 to be America's YEAR OF THE BLUES.  As celebrations, concerts and other events unfolded, George Hunt was declared the official artist of the Year of the Blues by Blues & Legends Hall of Fame Museum.  This painting became the central image for the HIGH COTTON TOUR, a visual/artistic celebration of the Year of the Blues.  George Hunt's High Cotton Tour moved from it's origins in Memphis, Tennessee to Radio City Music Hall in New York City where Martin Scorsese was filming the ultimate blues music documentary, Lightnin' in a Bottle.

From New York, George Hunt's exhibit moved to Seattle's Experience Music Project (aka Jimi Hendrix Museum), then to Chicago and back to Memphis before going to blues meccas in Clarksdale, Mississippi and Helena, Arkansas.